Increasing Readiness in the Marine Corps with Advanced Manufacturing

When military members and warfighters need a vehicle or tool to accomplish their mission, broken or malfunctioning parts are an unacceptable nuisance that stands in the way of mission success and completed objectives. When the mission requires something, warfighters and their commanders don’t want to hear that it’s not available, or that it’s in the shop.

The Marine Corps has long prided itself on fostering a culture of improvisation and innovation in service of accomplishing the mission. But, there are some things that a can of spray lubricant or duct tape simply can’t fix. And for those things, the military is turning to exciting new technologies for a solution.

The Marine Corps Systems Command (MCSC) handles acquisition for the Corps – making everything needed for the mission accessible for their warfighters. Their Advanced Manufacturing Operations Cell (AMOC) was created just two years ago to identify innovative new ways to bring equipment and replacement parts to bear for the Marine Corps so that Marines have what they need, when they need it, to do their jobs.

Leading the MCSC’s AMOC in these efforts is project officer, Capt. Matthew Audette. We recently sat down with Capt. Audette to learn more about his cell, what it does for Marines, and how a recent tool they created using 3D printing and advanced manufacturing (AM) is making life easier for the Corps. 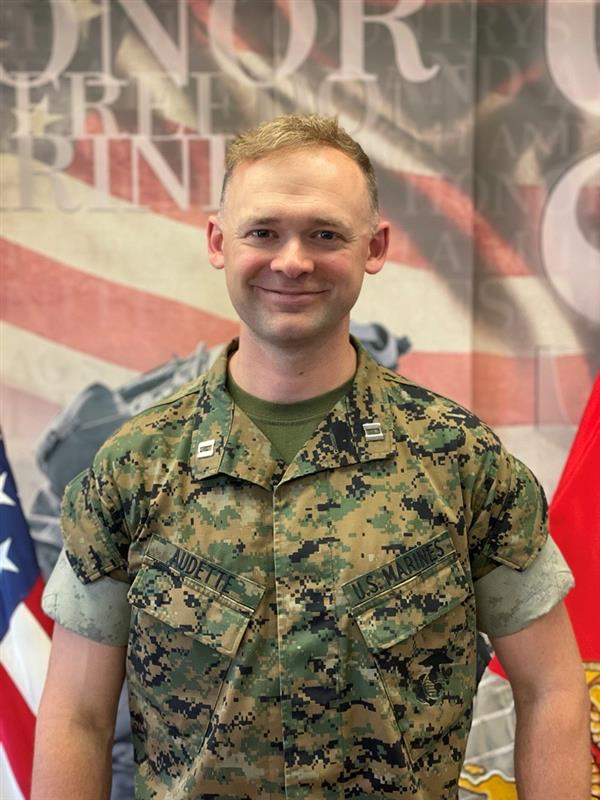 GovDesignHub (GDH): Can you tell our readers a little bit about the Marine Corps Systems Command (MCSC) Advanced Manufacturing Operations Cell (AMOC)? What is its mission? When did it get its start?

Capt. Matthew Audette: The AMOC was formally established in January 2019. It was built from the folks who had been previously running Marine Corps’ Advanced Manufacturing (AM) since 2016. The AMOC was stood up to address needs and gaps that were not easily resolved by industry, particularly in an expeditionary environment.

Our mission spans a wide breadth, but to sum it up succinctly we are the “on call nerds” for both the folks at the program offices and Fleet Marine Force who want to explore advanced manufacturing solutions. Since not everyone has that in-house expertise, we are centrally located and resourced to help out. If someone needs hard data to make a decision on using an AM part, we maintain relationships with labs that can get you those numbers. If you need help designing a part, we can do that, too.

We also run the USMC’s digital repository – a “Thingiverse” of USMC parts – that our users can pull from. That repository also has the part approval pipeline built into it. For instance, if a Lance Corporal in the fleet designs a solution to a problem, the part approval pipeline that the AMOC manages is how it gets assessed and categorized. My cell works with the program office that owns that piece of gear to determine what is needed to get that part approved.

In addition to those tasks, we also run the Marine Maker program. It trains Marines on rapid prototyping and technical problem-solving skills. Marines take a great amount of pride in our ability to improvise solutions on the spot. In the past, that toolbox had duct tape, 550 cord, and a lot of grit. The Marine Maker program aims to plus up that toolbox with things like computer-aided design (CAD), 3D printing, circuitry, programming, microcontrollers, laser cutting and more.

On top of that, we lead the experimenting and prototyping efforts to advance battlefield AM. Things like printing in austere, non-pristine environments with no network connectivity, or the large-scale printing of things like bridges and boats.

DH: The MCSC Advanced Manufacturing Operations Cell recently created an interesting vehicle servicing tool using 3D printing and additive manufacturing. Can you tell our readers a bit about that tool and what it’s used for? Why was it a useful addition to the toolbox?

Capt. Matthew Audette: Yes, the steering wheel removal device! I want to give a minor correction to that statement, but it’s got big implications. The AMOC did not develop that tool. That tool was designed by a fleet Marine, Staff Sgt. Kyle Owens. That’s a big part of this – the Marines at ground level know what the solution is, but, in the past, they might not have had the ability to develop it themselves.

Advanced manufacturing lowers that barrier to entry to producing a solution. The Staff Sgt.’s design was refined for printing by Cpl. Aiden Bemis, another fleet Marine, and they printed it. My cell’s contribution to this was providing the framework and funding that allowed it to be printed in metal. The Marines did the heavy lifting. We facilitated them doing it and making it a fleet wide solution.

That tool is a great example of AM saving both time and money. It’s used to remove steering wheels from some of our most common vehicles. The steering wheel needs to be removed to service other parts of the truck. The old tool, a slide hammer, is notorious for damaging a steering wheel while removing it. That’s a bad place to be – you can effectively take a truck out of the fight because while trying to maintain it, you’ve broken the means to drive it. You can see how this is a problem.

Staff Sgt. Owens was intimately familiar with this conundrum and came up with a solution that does not damage the wheel, and here we are. It doesn’t just save the cost of a damaged steering wheel. When you’ve got a truck that’s down until a new steering wheel arrives, that’s time lost. Depending on where you are- say, Okinawa, Japan- that could be weeks.

And the missions don’t stop because you’re down a truck, the other trucks put more miles on picking up the slack. Meaning that they have to be maintained sooner. The ripple effects of this are big.

GDH: Why is additive manufacturing effective for the creation of tools like these? How does it make the prototyping and fabrication process easier, most cost-effective, or more efficient?

Capt. Matthew Audette: It’s brilliant for a lot of reasons. The first one is my favorite. As I previously said, advanced manufacturing lowers the barrier to entry to producing a physical solution. It democratizes the ability to make something and then have it be repeatable.

Marines have always come up with solutions like this – every platoon and shop are rife with home-brew solutions that fix known issues. “If you’re out of this one thing, get yourself an old chem light, a steady hand, and a Dremel, and boom, you’ve got your fix,” or, “get yourself some of that pallet banding material from supply, bend it up like this, and wedge it in there.” Stuff like that. It’s everywhere.

But AM allows folks who don’t have a background in something like machining or engineering to jam out a design. And because that design is digital, its replicable fleet-wide. Other users can iterate on it and remix it to suit their needs.

In the past, a formal fix was usually a Marine describing the problem to an engineer who didn’t have the full context of that Marine’s job, and the engineer would go away and come back later with a solution. Now that conversation can start at the Marine saying, “Here’s the problem, and here’s how I fixed it.”

Maybe it’s a prototype. Maybe it’s not fully functional and needs some tweaking. Maybe it needs to be metal, or they need a hundred of them. But now they are in the design loop and bring the full context of their job to the drawing board with them.

The other piece of this, like you said, is speed and cost. Because AM has a relatively quick turnaround than other manufacturing processes, now things like a “guess and check” method to finding a solution is viable. In one case, we worked with a program office to experiment with 36 designs of two problematic parts to find what exactly was causing them to deadline a platform. Using AM we did all of those iterations inside of a week to identify the culprit and fix the geometry and then used AM in the solution as the tooling and jigs while the parts themselves were machined using traditional means.

Many times our prototypes are 3D printed to nail down the form and fit while the full solution is manufactured using other means. And in other cases, AM is the final answer due to things like speed, the ability to make them locally, or there’s just too low of a volume needed for traditional manufacturing means to make economic sense.

For additional information on how AM can help make government manufacturing more effective and efficient, click HERE to download a complimentary copy of, “Groundbreaking INNOVATION: Additive Manufacturing for Government Agencies.”