Large infrastructure projects are always difficult to design and complete. There are multiple different stakeholders – from local planning boards and commissions to local businesses to the general public – that want a say in the design, how the space will be laid out, and how the land will be used. And for good reason – large infrastructure projects can have a massive impact on a region’s economy and the quality of life of its citizens.

One such infrastructure project – the currently under-construction cruise port in Panama – is no exception. The proposed project will be an economic boon for the area, bringing international visitors and their tourism dollars into the country. But it needs to be much more than that, as well. Residents have demanded that the cruise port also serve as a beautiful public space, as well as a performance space for those that live there, and aren’t just visiting.

And, making this project even more complicated – if that is even possible – is the fact that the new Panama Cruise Port will be an artificial island at the entrance to the Panama Canal. With so much complexity to navigate, it’s no wonder that the Panama Cruise Port was one of multiple infrastructure projects that was a finalist for a 2020 AEC Excellence Award.

Mallol Arquitectos, a Panama-based architecture, design, and urban planning firm, is responsible for the design and management of this intriguing project.

We recently sat down with Sara De Maintenant, Technology and Innovation (TID) Leader, and Pablo Sardiña, Senior Designer of Mallol Arquitectos to discuss the design, what makes this project so difficult and innovative, and the new digital design technologies that are making it possible.

Here is what they had to say:

GovDesignHub (GDH):  Can you tell our readers a bit about Mallol Arquitectos and the work that your firm does?

Since its inception, it has been an office dedicated to design, focused on architecture, interiors, and urban planning. It works integrally with consultancy on project development, technical support and quality control, BIM management, branding, and wayfinding. Additionally, we have Mallol Integrated Office, a space open to small companies from different disciplines focused on innovation.

GDH:  What is the Panama Cruise Port project? And how and why did your firm become involved in the project?

MA:  The new Panama Cruise Terminal is a key infrastructure in the National Tourism Development Plan, designed by the Government of Panama. This new infrastructure project is intended to promote tourism in the country by creating new cruise routes in the Pacific, taking advantage of the country’s privileged position, and its connectivity between the Pacific and the Caribbean.

Mallol had the privilege of being part of the Cruceros del Pacifico Consortium, which won the public bid for the construction of this project. Mallol, as an architecture firm with extensive experience in large-scale projects, such as the new Tocumen Airport Terminal and the expansion of the Panama Canal, was in charge of the design of all ground facilities, including the terminal. 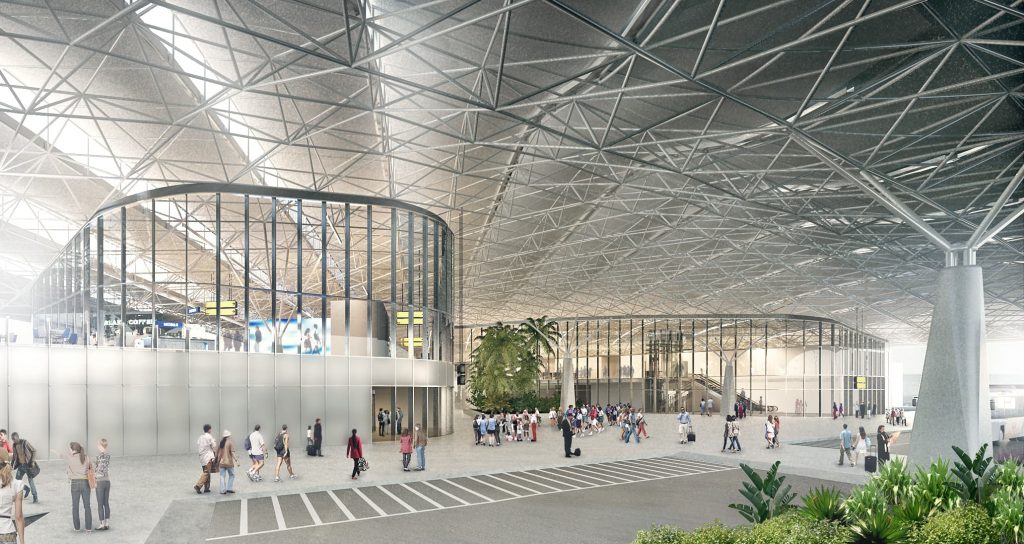 GDH:  This project was a finalist for an AEC Excellence Award this year. What is exciting about this project from a design perspective?

MA:  For us, the most exciting thing, apart from the challenge posed by such a complex project, has been to be able to design infrastructure that fulfills the required function and also can add value to citizens by creating a facility that can host public events. Thus, from the beginning, the project was proposed as an opportunity to create a large multipurpose public space that would serve the city, transcending the use originally proposed in the request.

Referring to technology, the design was structured by dividing it into multiple smaller projects based on the construction schedule closely related to the design of the different specialists, including maritime works, which were developed at the same time.

This allowed dividing the project into multiple projects working in parallel in different phases of development. In this way, it was possible to make clash detection, and definition of details in some areas of the project while others were still in design.

The use of Navisworks, carrying out clash detection from the early stages, allowed reducing conflicts in the construction phase and adjusting the design initially proposed for more optimal and cheaper alternative solutions.

We also developed the analysis of sunlight and study of the winds to define the architectural proposal using Insight 360, which determined the configuration of the facades of the proposal.

GDH:  Can you tell our readers what stage the project is in and what the future holds for it?

GDH:  What challenges need to be overcome in the design process? What role did new technologies play in the design?

The line between consumer and creator is blurring, due to the fact that consumer is demanding personalization and customization. Consumers want to participate in the creative process, and this is what we call “prosumer”, turning the role of the traditional consumer into a much more active role.

Technology advances exponentially, and barriers to commercialization, learning, and production are increasingly disappearing. This fact produces a democratization of information because today the access to technology does not mean a huge investment for the user.

While large-scale production dominates some segments of the value chain, innovative manufacturing models such as small-scale and Agile manufacturing are taking advantage of these new opportunities that technology provides. So, we are forced to innovate in the way we create value, and this fact naturally affects the manufacturing sector at different rates.

GDH:  What is on the horizon for Mallol Arquitectos beyond the Panama Cruise Port project?

MA:  As a global design company, our vision is to expand internationally beyond what we have done so far. Our expertise and knowledge in the development of different types of projects and various scales, open up a number of opportunities to impact the development of cities.

Part of what we have been doing in recent years is complementing our work with other disciplines that enrich our products and services. In this way, we provide a holistic service aimed at adding value for our clients and the users of the spaces we create.

For more information on the Autodesk AEC winners and finalists, CLICK HERE!

How advanced space manufacturing brings the solar system within reach