Following decades of continuous operations in multiple foreign countries, repairing key assets for military readiness is a major focus of today’s Department of Defense (DoD). But, when equipment breaks down and parts are difficult to find and expensive to produce, readiness suffers. Traditional manufacturing’s long production timeframes, distant warehouses, and lengthy shipping times cause critical equipment to often sit unused and in need of repair.

The military is already exploring 3D printing and advanced manufacturing (AM) techniques for keeping troops across the world well-equipped and mission ready. Can similar 3D printing technology be used in the fabrication of parts and the repair of military vehicles and weapons systems?

Bruce Colter of SPEE3D thinks that it can. We recently sat down with Bruce, the VP and General Manager at SPEE3D in North America, to talk about the state of 3D printing and how it can help improve the military’s readiness and supply chain. SPEE3D’s work with the U.S. military and its international partners and allies is an incredible example of what is possible and what the future holds for AM in the public sector.

Here is what Bruce had to say:

GovDesignHub (GDH): Can you explain what SPEE3D does?

Bruce Colter: SPEE3D makes the fastest metal 3D printers on the market – by a factor of 10-100X – using our patented Cold Spray Additive Manufacturing (or CSAM) technology which combines supersonic deposition and robotic tool path software to make metal parts in minutes instead of hours or days.

GDH: What is SPEE3D doing with the U.S. Army at the Rock Island Arsenal?

Bruce Colter: Rock Island Arsenal (RIA) is a Public-Private Partnership (3P) between the U.S. Army, SPEE3D, and Phillips Federal who is our distributor to the U.S. Armed Forces and other federal entities.

RIA has a LightSPEE3D machine onsite at their new AM Center of Excellence. And Phillips will be commissioning this machine in January 2021 for demonstrations for all of our armed forces to see our technology and participate in making Proof of Concept (POC) parts.

GDH: Why is SPEE3D working with RIA?

Bruce Colter: Because RIA is an “open base,” all military personnel throughout the U.S. Armed Forces can visit this new AM facility to explore SPEE3D’s technology for use in enhancing the warfighter’s readiness capabilities. Our machines are already in use for forward expeditionary exercises using our standard WarpSPEE3D equipment.

GDH: Can you describe the work that you are doing with Australia’s Army and Navy? 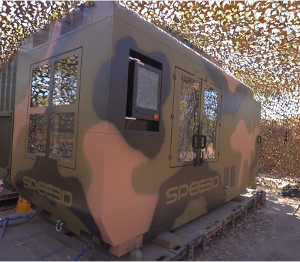 Bruce Colter: SPEE3D is providing WarpSPEE3D tactical machines in service for the Australian Army, their Navy, and now Special Forces. The Aussie Army has used its WarpSPEE3D to make more than 50 critical-need parts in the outback during a recent two-week field trial.

In 2021, the Aussie Navy will be commissioning the first-ever 3D metal printer on a naval ship. The Aussie Special Forces – equal to our US Marines – are being trained on their machine in Q1 of 2021. All of these machines are working to improve the readiness capabilities for the Australian warfighter by providing critical parts in minutes at the point-of-need, saving time, money, and lives.

GDH: How did SPEE3D come to partner with the military and federal governments?

Bruce Colter: The original request was from the Australian Army for training on SPEE3D’s technology in the Northern Territory of Darwin along with a partnership at Darwin University. The training quickly progressed to the Army ordering SPEE3D equipment and services for practical use in field trials. It has now expanded into the Australian Navy and Special Forces along with inquiries from the United States, Canadian, UK, and French Armed Forces.

Bruce Colter: Before AM, the warfighter would have to get their spare parts shipped in from bases which were many miles away and often unprepared to supply them quickly. This would mean that a key or critical asset might be out of service for weeks to months while waiting for a part to arrive at a forward operating base.

This costs time and money, plus jeopardizes the warfighter’s ability to serve with a fully functional asset – for example, a Humvee can be idled due to a simple battery terminal corroding.

GDH: SPEE3D has a unique approach to 3D printing metals. How is your approach better than others, and why is it good for military use cases?

Bruce Colter: In 3D metal printing, most of the technologies today – such as Powder Bed Fusion (PBF) – are not safe solutions. They use volatile gasses and material that can explode in the field. Also, their technologies are not conducive to harsh environments due to leveling issues and laser implications.

With SPEE3D’s Tactical CSAM technology, all of these issues are addressed with a supersonic and safe deposition process that requires minimal leveling, no lasers, and only the use of compressed air, which is accelerated at Mach 3 onto a robotic controlled build platform to create parts in minutes.

GDH: What are the major obstacles to overcome for your pilot programs? And, what are the exciting developments that you see on the horizon in AM and at SPEE3D?

Bruce Colter: Our standard equipment has been used in testing the performance benefits of SPEE3D’s technology within the armed forces. We are looking into putting all of this technology, including a printer, CNC, heat treat, power, and auxiliary equipment into one Conex box which could be transported via truck, airship, or helicopter to the battlefield front lines.

In addition, more materials are being developed for our CSAM process like Stainless Steel SS316 which will be released in Q1 of 2021.

GDH: As new AM technologies are introduced into environments like the military, what skills need to be available within personnel to take advantages of these advancements? And how does industry partner with the public sector to ensure adoption and the realization of the intended benefits?

Bruce Colter: AM skills vary with different technologies. CSAM is the least complex and most beneficial to the military as it is a simple but elegant process using fast, built-in CAD-to-simulation software which is then loaded into a SPEE3D “game-like” console for printing.

We recently performed an online training program at an installation in a day and a half and the participants were making parts in two hours after the final class. Most AM technologies require many days to learn the complexities and weeks to commission a system.

For additional information on SPEE3D’s work with the military and public sector CLICK HERE!

How bio-analytics and AI can transform product design and infrastructure