ASCE on why America’s infrastructure deserves a D+ grade

The ASCE is uniquely qualified to rank and grade the quality of our nation’s infrastructure. Its membership is comprised of more than 150,000 individuals in the civil engineering industry across 177 countries. These experts weigh and judge the nation’s critical infrastructure against eight different, key criteria, including its ability to meet current requirements, how well prepared it is for future requirements, its current physical condition and its impact on public safety, among others.

What does the most recent Infrastructure Report Card say about America’s critical infrastructure? It wasn’t a positive assessment. The nation’s infrastructure received a cumulative grade of a D+, which the ASCE defines as, “…in poor to fair condition and mostly below standard, with many elements approaching the end of their service life.”

The most recent Infrastructure Report Card, which was released in 2017, isn’t the first in which our nation received low marks. It also received a D+ in 2013. This raises interesting questions, like, why is the nation’s infrastructure scoring so low? What has to be done? Why aren’t things improving?

To get answers to these questions, the GovDesignHub sat down with Casey Dinges, Senior Managing Director of the American Society of Civil Engineers, to discuss the status of infrastructure in the U.S. and the possibility of better days ahead. Mr. Dinges was integral in the 2017 Report Card for America’s Infrastructure and has advised government agencies and provided commentary on the major media outlets regarding infrastructure investment. 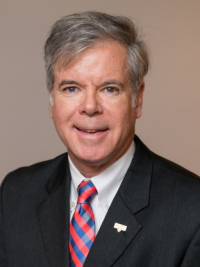 GovDesignHub (GDH): How does the US rank in comparison to other countries in terms of infrastructure conditions and development?

Casey Dinges: The World Economic Forum’s Global Competitiveness Report 2019 ranked U.S. infrastructure 13th in the world. Singapore, the Netherlands and Hong Kong ranked first through third, respectively. The U.S.’ 13th position is a drop from ranking 9th in the 2018 report.

It should come as no surprise that the U.S.’s economic competitiveness also fell, dropping from 1st in 2018 to 2nd in 2019, behind only Singapore, who boasts the highest-graded infrastructure. Infrastructure plays a vital role in supporting the economy, allowing for transport of goods and services and efficient travel for employees and tourists around the country.

These reports and domino effects of declining infrastructure systems only reinforce the need to improve these systems to better compete in the global marketplace.

Casey Dinges: According to ASCE’s 2017 Report Card for America’s Infrastructure, the U.S. faces a $2 trillion spending gap on our infrastructure systems, assigning our nation’s infrastructure a cumulative grade of D+. Our surface transportation infrastructure accounts for $1 trillion of that deficit on its own, and this gap will assuredly climb after transit, motor fuel tax, and water utility revenues have all declined due to the COVID-19 pandemic.

We see the consequences of our failing infrastructure play out every day. We waste hours sitting in traffic, power outages become more frequent, and we lose billions of gallons of water through leaky pipes – and these impacts are having a direct effect on American families, who are losing at least $3,400 a year in disposable income due this poor, aging infrastructure.

To begin addressing these issues we produced an in-depth report, entitled Failure to Act: The Impact of Current Infrastructure Investment on America’s Economic Future. In it the ASCE suggests that Congress’ inability to agree on a transformative infrastructure bill to eliminate the funding gap and secure the safety and economic well-being of American citizens is holding us back.

For our grade to improve, Congress will need to boost the nation’s economy and include key issues such as: reauthorizing surface transportation programs, reauthorizing the Water Resources Development Act, and addressing our water systems as a national priority.

It’s important to make sure there are concrete plans in place that ensure projects continue on a path even when leadership changes. Luckily, infrastructure is a bipartisan issue, and many people running in this past election focused on it – from the state to federal level. It’s already been on the table in discussions with the President and members of Congress.

Capital project plans must be based on quantifiable metrics rather than political wish lists, and they must be identifiable, doable, and also have to do with making infrastructure more resilient to recover from natural disasters, which are becoming more frequent.

GDH: There was a report a few years ago that China had replaced a bridge within 43 hours. Is this likely in the US? Are there obvious barriers that prevent U.S. infrastructure projects to build in a similar manner? Should this be a goal for U.S. projects? Is it fair to compare?

Casey Dinges: U.S. infrastructure practices aren’t comparable to China’s due to vast policy differences regarding government control and differences in workforce size. However, the aforementioned regulatory processes we have in the U.S. that contribute to delayed or discontinued projects makes the concept of a 43-hour bridge replacement seem far-fetched.

Major U.S. infrastructure projects require lengthy permitting and environmental review. Additionally, many infrastructure projects cross jurisdictional boundaries and require approval from multiple levels of government and various agencies. Permitting reform has been an area of focus by the U.S. Department of Transportation (USDOT) in recent years and a recommendation from ASCE.

There are examples of expediated success stories in the U.S. One such example is the emergency repair of the I-5 Skagit River Bridge that serves as a primary freight corridor between Washington and Canada, conducted in 2013. The Washington Department of Transportation (WSDOT), the National Transportation Safety Board (NTSB), and Atkinson Construction demolished the collapsed span less than four days after the initial collapse. Temporary parts were sent and erected to be open for public use less than four weeks after the initial failure.

GDH: The cost of projects is often seen as the primary barrier to infrastructure projects. Are there any trends such as privatization, or partnerships that you see as likely to overcome this?

Casey Dinges: Public-Private Partnerships (P3s) play a key role in the financing and delivery of infrastructure improvements, often proving to reduce costs and increase efficiency. As government funds are stretched thin, private capital has allowed for the completion of critical projects that otherwise would not have been finished – however, guiding principles are needed with any P3s to ensure projects are properly planned, implemented and maintained. Additionally, public private partnerships still require public funding and are just a tool in the toolbox – not a panacea to closing our entire infrastructure gap.

Also, we recommend the appropriate use of Life-Cycle Cost Analysis (LCCA) principles in the planning and design processes to evaluate the total cost of projects. The analysis should include life-cycle cost associated with planning, funding, design, construction, operation, maintenance, and decommissioning of projects.

The analysis should also include impacts associated with innovation, resiliency and sustainability as well as regulatory, environmental, safety, and other costs reasonably anticipated during the life of the project, whether borne by the project owner or other stakeholders. Embracing LCCA can result in higher quality projects with lower long-term costs, increased industry competition instead of selecting based on the lowest bid, and improved credibility with the public.

The design-build project delivery system has also proven effective at streamlining projects by combining design and construction responsibilities into a single contract. This communication and organizational tool allows for more efficiency in the construction process, reducing time and costs of certain projects when implemented properly.

ASCE has developed numerous technical standards that incorporate resilience as a fundamental performance criterion and encourages the mitigation of effects from hazards and improved the warning systems for impending hazards. This means anticipating how change in climate could impact our designs and our needs. For example, withstanding extreme weather events, water scarcity, and sea level rise.

In part two of our two-part Q&A with Casey Dinges, we discuss infrastructure investment post-COVID-19, and the possibility of a fourth Industrial Revolution.

To learn more about rebuilding America’s infrastructure and the role that digital design solutions play in the AEC lifecycle of large infrastructure projects, click HERE, to register for the upcoming “Infrastructure Tuesday” series of Webinars.