Any large public infrastructure project is going to be difficult and filled with challenges. However, when you’re renovating and upgrading a public transportation hub that was built when FDR was President and the same year that both Superman and Batman were introduced to the world, you’re going to run into roadblocks.

Today, Terminal B of LaGuardia Airport serves more than 15 million passengers a year. But when it was renovated in 1966, it was intended to serve 8 million. That disparity was one of many reasons why the Port Authority of New York and New Jersey began the process to renovate the terminal, and Skanska was the construction company they chose to make it happen.

To make their transformation of Terminal B a reality, Skanska would have to do construction in phases, while an airport operated around them. They’d also have to do construction above and around active roadways and other bustling thoroughfares in New York City. And the key to doing so successfully was the digital design solutions that they relied on every step of the way.

We recently sat down with David Tullis, the Design-Build Manager for Skanska USA Civil, to talk all about this incredible project, the lessons they learned along the way and why Autodesk digital design solutions were instrumental in the process. 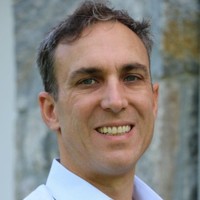 GovDesignHub (GDH): Why was LaGuardia Airport looking to replace Terminal B? What about the old terminal made it no longer work for the Port Authority and for passengers?

David Tullis: The Port Authority was looking to replace the terminals at LaGuardia Airport because they were outdated and handle significantly higher passenger volumes than they were ever intended to. LaGuardia was originally built in 1939. Since then, the airport has undergone several renovations, including significant work in the 1960s to improve and expand the facilities, which is when Terminal B opened.

The ongoing redevelopment project will help expand that overall airport capacity to 34 million annual passengers, which will have a tremendous, positive impact on the customer experience and the airport’s operations now and for many years to come. The roadway and taxiway network, among other improvements, will also see significant changes which will create efficiencies in landside and airside operations, which was another of the Port Authority’s main goals for the redevelopment.

GDH: How were digital design solutions utilized in the planning and construction of this new replacement terminal? What solutions were utilized?

David Tullis: Skanska’s team relied heavily on BIM and other digital design solutions from the get-go—Skanska is essentially building a brand new Terminal B and all the roadways and associated infrastructure within the footprint of an existing and active airport. Digital design tools were critical to our overall planning and sequencing, allowing Skanska to phase work in a way that would minimize any impact on the airport’s daily operations.

During the proposal stage, Skanska developed a series of 3D models – as well as 4D or time-dependent models – that laid out not only how the airport itself would be rebuilt but also how the roadway network that feeds passengers in and out of the terminal would be staged and modified over the project’s duration.

Nearing the final design and construction, tools like Revit were crucial to our coordination, both internally and for interfacing with subcontractors. There are a host of systems – from HVAC and electrical to baggage handling – that had to be accounted for in our design. To do this, Skanska would take the models that our subcontractors developed, and the Skanska-Walsh BIM team would stitch them together to resolve any clashes before it is ever out into the field.

GDH: Were there any unique challenges that Skanska and the other stakeholders faced with this particular project? Was there anything particularly different or difficult about this project in contrast to others?

David Tullis: Skanska was faced with a number of obstacles due to the existing physical conditions and the site’s constraints, as well as a unique challenge related to the unpredictable nature of technological development.

When work began, black cars and yellow taxis still ran New York. Nobody could have predicted the explosion of on-demand vehicles, but that’s exactly what happened. While installing a totally new roadway network system, Uber and Lyft are changing how for-hire vehicles operate and everyone involved in the project had to adapt in real-time. These vehicles are entirely different from the typical drop-offs everyone was used to in that they circulate, putting more and more traffic on the roadway network. Plans and designing are constantly being tailored and constructed around this new model, which Skanska has been able to do successfully through close coordination with the Port Authority and LaGuardia Gateway Partners to ensure the roadways remain up and running.

Shifting back to the site, there are two big challenges that come to mind. The first is that, as I mentioned previously, this project is akin to performing open heart surgery on a runner in the middle of a marathon. LaGuardia sits on 680 acres of land that are hemmed in on every side by waterfront or highway, so we don’t really have that much real estate to work with. Every new square foot of building, roadway, or staging is a foot lost for operations. It’s a constant give-and-take that requires an incredible amount of planning and coordination to execute and to ensure the airport remains fully operational at all times.

To give one example, the design features dual long-span pedestrian bridges that connect the Headhouse to the new island concourses and gates. In the case of the pedestrian bridge that connects to the new terminal to the eastern concourse, that meant we were faced with building the bridge over a live roadway network and an active central heating and refrigeration plant.

Finally, the airport is built on a site that is geologically made from fill that is prone to settlement. When we started our work, we found the extent was greater than originally anticipated, so we had to undertake additional surveying and remediation to ensure the new building wouldn’t settle. This included a combination of deep piles and foundations for buildings and bridges, and removing existing materials below the airside pavement and replacing them with lightweight cellular concrete.

GDH: How did Autodesk’s digital design solutions help Skanska and other stakeholders overcome these challenges? What role did they play in making the project possible?

David Tullis: The main thing that design software helped with was allowing us to integrate all the details of the construction and coordination in 3D prior to shovels in the ground. We were able to import various models provided by our subcontractors and coordinate and make adjustments before building.

We always want to resolve clashes electronically on the computer– it’s easier to make adjustments using pixels rather than in the field when cost and schedule can be impacted far more. Autodesk tools like Revit have been tremendously helpful in helping Skanska achieve this.

GDH: Where is the renovation today? Has it been completed, or is it ongoing? When is it scheduled to be completed?

David Tullis: The project is being executed in phases, bringing new buildings online and then decommission the existing structures afterwards. In 2018, Skanska completed the new Terminal B parking garage and the new central heating and refrigeration plant, and the new Eastern Concourse was opened to the traveling public. There are also significant upgrades to the airside and roadway infrastructure, including large portions of the roadway network and associated bridges and access roads connecting LaGuardia to the Grand Central Parkway.

The Headhouse structure is nearly complete, estimated to go online by summer 2020 – which includes the pedestrian bridge connecting the Headhouse to the new Eastern Concourse and the associated frontage access road network. The first gates of the new Western Concourse will begin to open later in 2020.

GDH: Are there any particular lessons learned or best practices that have been identified during the construction process that you can share with our readers?

David Tullis: A project of this scale and complexity will always present challenges, no question. The way that we overcame this was by assembling an extremely diverse team with varying skillsets and backgrounds. As we ran into real technical challenges like the ground settlement issues, we drew on that diversity of experience to come up with solutions that in some cases hadn’t been used before to avoid any major slowdowns or budget increases. This really reinforced that the best way to tackle a complex project is to have a diverse team of problem-solvers from day one.

The scale of the project also presented us with an opportunity to test out emerging technologies like laser scanning, 360 photography, and autonomous vehicles. We have found great success with all of these new tools because we had the opportunity to investigate where they can best be implemented to increase accuracy, safety, and efficiency to deliver a better final product to our clients.